In addition to spiritually  sweeping away negative energies, The Witches Broom, or Besom is used in other ways in witchcraft.

The Besom is a tool used in magic and ritual. It is sacred to the Goddess and God, and promotes fertility of person or land. It is also protective, and cleansing.  Those accused of Witchcraft in Europe were thought to ride on brooms, but were likely  just townsfolk that were spotted jumping around on brooms to promote fertility.
Due to its nature of purification, the Besom is linked to the element of water. It can be placed on or near the West/water side of your Altar.
The traditional Witches’ Besom is made with an Ash handle, birch twigs, and willow binding.

In early American slave weddings as well as Romani wedding ceremonies,  the couple would ritually “jump the broom” to solemnize their marriage, and for some, encourage fertility.  In modern times, the broom is also used as a ritual tool is used to sweep away negative energies and astral “dirt” or build up from the Altar and ritual area. When doing this, you do not need to have the bristles touch the ground or surface that you are cleansing. Many modern Pagan hand-fastings include a jumping of the broom.  The Besom is also a powerful protection tool. Laid across the threshold, the besom can prevent spells and negative energies sent to the house and to those residing within. (I have mine hanging on a wall near my front door.)  A broom placed under the pillow is said to bring pleasant dreams and guard you while you sleep. (Information via Kelly Kiley)

These Cinnamon Broom Witch Besoms have been decorated with special items to bring in various energies to your home.  Place near your front door for added protection. They are for sale in person at Gypsy Moon in Port Lavaca, TX or through DM/E-mail. 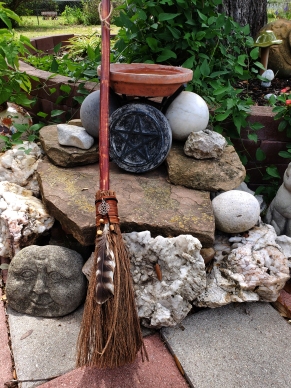 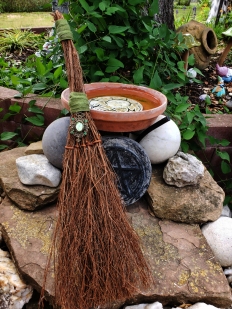