I absolutely love doing paintings with texture.  I’ve played around with different mediums trying to see what different textures I can make.  This particular painting was based off of a sketch I did for #inktober2019. It was a simple basic sketch.  But it had tons of potential.

To begin, I took this sketch and redrew it on a square canvas. It was interesting trying to decide which parts needed to be on there and how to incorporate the whole feel of the image.  There is an art to picking and choosing the best vantage point for something like this.  I should add that before I sketched the image on the canvas I prepped it the night before.  I glued on some crumpled paper and applied some gesso.

Once I had the drawing on my canvas I drew over the important lines with a glue gun.  It adds this glorious texture to the painting. As an added plus it dries quickly and can be painted over quickly.  I re-primed the canvas with gesso

and moved forward with laying down color.  This is the first layer of color and texture.  I chose to use watercolor as the prime coloring for this particular painting.

I had some difficulty deciding on the best way to get the cloud exactly the way I wanted in my head and instead of using simply the outline as in the sketch that I would literally build a cloud.  To do this I used cotton balls and mod podge.

As a finishing touch I did my final shading and color texturing/gradients using some metallic water colors.

The finished product turned out better than I could have ever imagined.  My mom fell in love with it and so for Christmas I gave it to her. 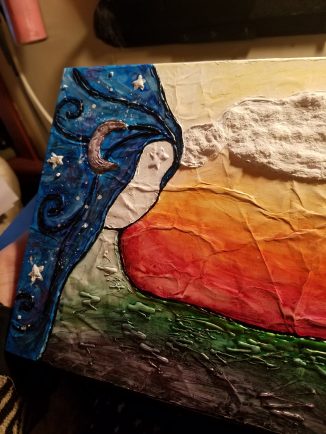