October 5th of this year marks the 5 year anniversary with my wonderful amazing husband.  Our wedding was super easy peasy…. We actually spent less than a grand and since we had been living together for a while already, we requested that people give us money instead of gifts, we ended up making about $3000. It was pretty rad. 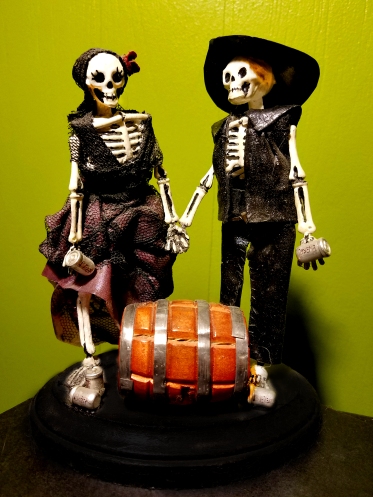 We got married at Howard’s in Shiner.  The place is already decorated pretty awesome so we didn’t have to buy decorations. We didn’t get married by a priest but rather a friend.  My husband was catholic, but since he was married once before he couldn’t get married in the church and me? Well at the time I had no religion or spiritual practice.

One thing that we both love however is punk music, beer, occult things and Halloween things.  We looked everywhere for a cake topper but we couldn’t find something we both liked.  So I decided to make to make one. Which is pretty common for us actually.

I painted some miniature skulls from the dollar store, dressed them, and found the cask/beer cans at a craft store in the doll house section.  It was a lot of fun! And turned out more amazing than I could have ever imagined.  Five years later, and my little borrachos are still standing tall and proud.